Look Who’s Back by Timur Vermes

The American-educated son of a wealthy German publisher once crowed proudly to me of the magnificent wide roads and wonderful autobahns the Fuhrer had been responsible for, as we toured the sights of Berlin. But his father’s staff looked away and blankly refused to comment when in passing I mentioned a fascinating BBC radio programme about Hitler’s relatives, whom it was suggested he might have visited in England before the outbreak of the First World War. Hitler was simply not a subject for conversation for ordinary Germans. 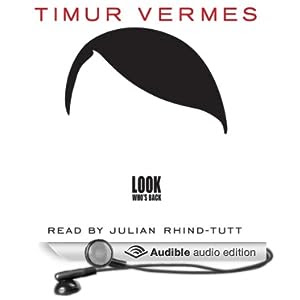 Which might go some way to explaining the reception Timur Vermes’s novel Look Who’s Back seems to have had when it was published in German in 2012 under the title Er ist wieder da. Hitler has for so long been taboo in Germany and his writings banned (even though they are so vile that readers hardly need to be protected from what successfully condemns itself). But can it really be that German readers are so ignorant of the facts of the Third Reich that at the end of Look Who’s Back Vermes has to provide potted histories of the main players in the Nazi hierarchy? In the UK there are television channels that provide little more than documentaries on Hitler, Nazism and the Second World War.

So perhaps the German-speaking world was ripe for a satire on the modern world through the simple conceit of Hitler reappearing almost seventy years after his death and continuing with his deluded rants. And there is some humour in the idea that Hitler is taken to be a clever mimic who takes his method acting to the point where no one can question him again as to his true name, age and identity. And as a television and internet ‘comedian’, the Rumpelstiltskin dictator, like a modern-day Thersites, is thus allowed to comment on the present day and interrogate twenty-first century Germany and its immigrant workers, ‘handies’ and computers, modern architecture, fast food, liberated women, uncensored newspapers, non-Gothic typefaces, Americanisms and pooper scoopers.

The translation is excellent and the performance by Julian Rhind-Tutt exemplary. But the whole idea falls limp and flat: the book is simply not very funny and not for that matter particularly satirical. The true irony is that Hitler wouldn’t for a minute suffer the foolish and deluded television performers and producers, especially as we are led to believe that he has not mellowed at all during his absence. Perhaps Vermes is trying to tell us that we have become so distracted by celebrity and trivia that we wouldn’t notice if another rightwing movement became popular again, and that we flatter ourselves at our peril that modern culture is too sophisticated to be hoodwinked once more. Perhaps.

Look Who’s Back remains, when all is said, a cultural oddity, with a nice piece of artwork on its cover.
* * *
© copyright 2014 AudioBooksReview. All rights reserved.
Buy Look Who’s Back