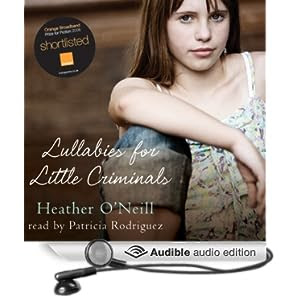 The short but poignant tale of Baby, aged twelve, being brought up by her father Jules, still in his twenties, in the seedier parts of Montreal, won much acclaim on its publication in 2006. Words such as ‘gritty’, ‘raw’, ‘real’ don’t do justice to the skilful and sensitive voice of this talented writer. And so much more comes across in the powerful reading by Patricia Rodriguez. Influenced, perhaps, by Donna Tartt, Heather O’Neill is a new voice who will undoubtedly go on to even greater things. Her second novel, The Girl Who Was Saturday Night, has just appeared in the UK.

Jules is a drug user and little more than a child himself. Baby’s mother, so Jules tells Baby, died when Baby was born. Quite how she died he doesn’t let slip until almost the end of the novel. Most of what he says is wishful thinking. Baby for the most part has to look after herself. She makes friends, but the parents of her friends don’t think she is a suitable companion, and with her father often absent and her own apartment locked and unavailable, Baby is pushed into the clutches of the local pimp, who at least provides shelter and sustenance. Too soon, of course, Baby has to go to work turning tricks, with a succession of punters, most of whom are gripped with self-disgust when they learn just how young she is.

In spite of everything, it is Baby’s resilience, wit and optimism that strike you – the childlike trust that things can only get better, despite the bitter cold of the streets of Montreal and the frosty indifference of Baby’s better-off fellow citizens. At the end of the book, Baby’s future seems just a little brighter as she moves out of the big city to the aunt who, it appears, is one of the few people in the world who want to look after this haunting street smart little girl who has grown up in so many ways and is in reality still just a baby.