Tracey Thorn, Bedsit Disco Queen: How I Grew Up and Tried to be a Pop Star 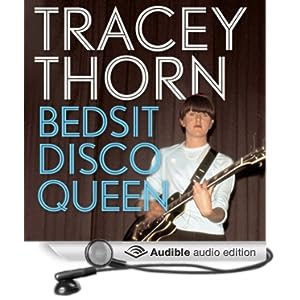 Commendably and appropriately published by Virago, Bedsit Disco Queen is quite simply one of the best listens this year. Perhaps inaugurating a trend among pop biographies (recently joined by Morrissey), Thorn pens her own book, making all the ghosted pop biographies that litter that odd corner of the music section in bookshops seem tired and passé.

With undergraduate and postgraduate degrees in English and a definite talent for the written word, Thorn’s biography is a highly reward listen. She is surprisingly modest and endearingly funny and you don’t need to be a Marine Girls or Everything But The Girl fan to enjoy what is a wise, witty and engaging view of the life of a celebrity. Thorn comes across as a dedicated musician whose innate talent has been matched by good luck and hard work, but whose life has at times also been visited by emotional and physical stress and near tragedy.

As Tracy Thorn reminds us, most pop careers are short-terms affairs, and what is so remarkable about Tracy and Ben (Watt, her partner, and co-member of Everything But The Girl) is their longevity – or, rather, their rediscovery at a point in their careers when most of the musicians they were colleagues with and competing with in their heyday (the 1980s) had long faded into obscurity and the music industry’s back catalogue. The remixed ‘Missing’ and the subsequent collaborations with younger musicians, together with Ben Watt’s deejaying and successful co-ownership of clubs, gave the couple a different kind of respect from those who followed them in their early days and a new kind of respect from a whole new generation of music fans.

Waiting to pick up her children from school one day, George Michael draws up in his massive black-windowed Range Rover and calls over to Trace, much to the astonishment and amazement of the other mothers at the school gate (even though they are in Hampstead, where only the super rich hang out). From Thorn’s self-conscious singing shut in a wardrobe to the birth of her and Watt’s three children, it is the honesty and homeliness of the small details of the bedsit disco queen who becomes a real pop star that make this such a fascinating listen. The book is sure to become the blueprint for pop autobiographies of the future. And there will be no end of those.