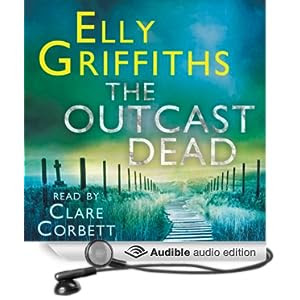 Elly Griffiths’ cast of characters are certainly not going to appeal to everyone’s tastes. Ruth Galloway is undeniably eccentric and her domestic arrangements far from conventional, but her circle of friends (including the druid Cathebad and Detective Inspector Harry Nelson) and the rural university where she works provide more than enough material for a somewhat satirical slant on the forensic detective genre that has gripped readers and television commissioning editors so strongly in last ten or fifteen years.

Ruth is a forensic archaeologist and her excavating work quite naturally leads to the discovery of crime scenes from the distant and sometimes not so distant past. Digging in the grounds of Norwich Castle, Ruth uncovers the remains of a body that evidence suggests might well be that of a murderess named Jemima Green, aka ‘Mother Hook’ on account of her claw-like hand, hanged in 1867 for the murder of five children in her care. Soon, much to the delight of the university board, a television documentary team are on the scene.

As this is unfolding, a tantalisingly similar crime, this time in the here and now, is being investigated by the police led by the cynical Harry Nelson, father of Ruth’s daughter Katie. Three children from a family in King's Lynn are found dead, one after the other, and then another child goes missing.

While some of the twists and turns of this likeable yarn are a little slow and the villain is plain to the listener long before she is recognised by anyone in the book, there is a lot to enjoy in the evocative setting (Norfolk and it environs) and the people who inhabit this particular part of England. If you haven’t tried any of Elly Griffiths books before, it is well worth a listen.