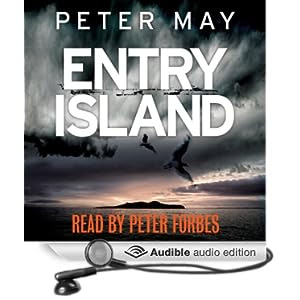 Peter May is clearly drawn to isolated small communities and inspired by the tensions and drama they provide. Those disappointed that May’s Lewis Trilogy has now been completed will find much in Entry Island to make up for things.

This time a detective by the name of Sime Mackenzie investigates the murder of a wealthy businessman on Entry Island, which is 850 miles from the Canadian mainland in the Gulf of St. Lawrence and which, as its name suggests, was the first stopping point for all the migrants from Ireland and Scotland in the seventeenth, eighteenth and nineteenth centuries.

The seemingly open and shut case, in which the victim’s wife, drenched in her husband’s blood, is the only suspect, turns out to be much more complicated than at first sight.

Mackenzie, who was sent from Montreal to bring in the suspect, is of course the only member of the police force to think that all might not be as it seems. Mackenzie’s judgement, however, is clouded by a host of issues. First, his ex-wife Marie-Ange is the crime scene investigator appointed to the case. Then he discovers Marie-Ange has been having an affair with his superior officer and that all his colleagues have known of this for months. Finally, when he meets the suspect, Kirsty Cowell, he has the uncanny feeling that he knows her.

Parallel to the murder investigation May recounts the story of one of Mackenzie’s forebears, taken from a journal written 200 years ago, which tells of the Scottish Highland clearances and the fate of Simon, son of a crofter, and another Kirsty, daughter of a wealthy land-owner, whose life Simon saves when he is only a young boy, but who remains his loyal friend despite the social barriers that divide them. The journal story is a tour de force on its own. Combined with a claustrophobic procedural, an emotionally and physically exhausted insomniac detective painfully conscious of his Scots roots and a series of convoluted twists of plot and circumstance, Entry Island is another masterpiece in the Peter May canon.