Orange is the New Black by Piper Kerman 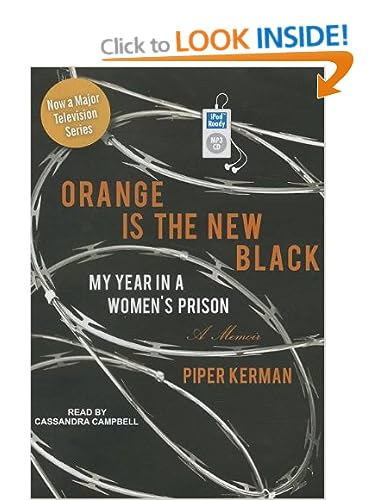 Netflix’s groundbreaking television series Orange is the New Black was arguably the most original new series of 2013. The fact that it was made not for one of the major US broadcasters but was commissioned and funded by the Internet subscription service Netflix is set to revolutionise television henceforth on.

Don’t expect a book of the film. The book inspired the television series, and the series writers wholly transformed characters, events, personalities and dramas.  And it makes exceptionally fine television. The book, nevertheless, is moving, revealing and rewarding: an inspiring, entertaining and eye-opening piece of writing that repays a close listen.

Piper Kerman, educated, white and resolutely middle-class, hardly resembles the young woman who, ten years before, mixed with drug runners and agreed to deliver suitcases of drug money within Europe after living it up in a dissolute Indonesian playground. Her past catches up with her, however, and seemingly out of the blue this nice girl with a rather nice job in the media and very nice fiancé finds her nice middle class life turned upside down as she is convicted and sentenced to fifteen months at an infamous women’s prison in Connecticut. Inmate 11187#424 discovers there is a whole new life in there – one she has only to survive for just over a year but that is home from home for women of all ages, races, and backgrounds. From strip search to release, Inmate 11187#424’s startled and intimidated account of the baffling prison world of unfair, arbitrary rules and codes and its unpredictable and dangerous relationships is fascinating and absorbing. She meets women from all walks of life, some of whom surprise her with their generosity and simple acts of acceptance, others who misunderstand and try to traduce her.

Heartbreaking, heart-warming and enlightening, Orange is the New Black is hard to beat.

Buy Orange is the New Black