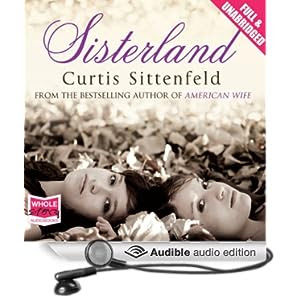 Curtis Sittenfeld’s Prep and her follow-up The Man of My Dreams revealed a great storyteller with rich gifts. American Wife disappointed, somewhat, perhaps because of the knowledge that it was inspired by events in the life of the real wife of an American president. It was too real for comfort.

But Sittenfeld’s characters eschew comfort, even as they are surrounded by the superficialities of bourgeois suburban American family life. Sisterland is set in this milieu, only this time there is another simultaneous world – the sisterland of identical twins Kate and Violet, who share a secret psychic gift.

Sisterland follows the girls’ lives from their school days; their parents’ lives – unhappy, unfulfilled, loveless – helplessly adumbrating the girls’ destinies. Identical twins they may be, but when Kate lets slip to a school friend about their gift at the age of thirteen, things are never quite the same between them and they are never the same.

Twenty years on, Kate, wife and mother, no career, has settled down in the suburbs to raise her two young children. Violet has a problem with her weight, is single and eccentric: a lost soul. She makes fun of Kate’s motherliness and having let her own sister slip away discovers the Sapphic in her soul. And when one day she predicts a major earthquake in the St Louis area where they live, their lives change for ever.

The novel is prefaced by an account of the astonishing earthquakes of New Madrid, Louisiana Territory in 1811 and 1812, which were so powerful that the mighty Mississippi reversed its course, whole towns were swallowed up and tremors were felt hundreds of miles away. The quake caused church bells to ring in Boston, 1,250 miles to the east. Vi's announcement produces an equivalent media maelstrom.

Kate is afraid of her paranormal gifts, initially planning to opt to adopt children rather than risk passing on her unfortunate genes to her own. With Vi she had once helped the police locate a missing child, but it is clearly something she wants to deny. Vi’s less than conventional life is transformed as she builds a career out of her clairvoyance, and as the day Violet has announced for the earthquake approaches, Kate attempts to reconcile her troubled relationship with her sister and truly to understand her own fate in the process.

In the end, it is an earthquake of her own making – a single act of infidelity and its seismic consequences – that forces Kate and husband Jeremy at last to leave St Louis and break away from the ties of family, guilt and duty that have previously so claustrophobically bound.