The Lewis Man by Peter May 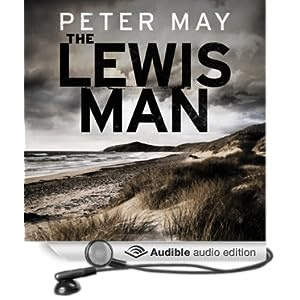 The Lewis Man is not to be dismissed simply as ‘crime fiction’, a label often associated with those last-minute grabs from  mountainous piles at airport bookshops. The mise en scène of The Lewis Man might read at first like a murder thriller, but it is so much more. A corpse, which could have lain buried for thousands of years like the famous peat men of recent discovery and celebrity, is recovered from a peat bog on the Isle of Lewis, except that a tattoo of Elvis Presley visible on the darkened flesh makes the date of death much more pressing of enquiry, as do his injuries. And when DNA from the remains is matched to some recently taken from all the men on the island during the murder enquiry in the first Lewis novel, The Blackhouse, Former Detective Inspector Fin Macleod is drawn into the drama. It turns out the dead man is related to Tormod Macdonald, father of Fin’s childhood love Marsaili, whose house is overlooked by the ruin Fin is attempting to bring back to life.

Tormod is now an elderly man suffering from dementia, thrown out by his wife and rescued by Marsaili before he is found refuge in a care home. He always claimed to be an only child and, like many in the Islands, was fervently anti-Catholic. But we hear brief remembrances of his boyhood and upbringing in the small moments of lucidity in his deepening dementia; and we learn a different story – tragic, profound and moving – as Fin discovers the painful truth of Tormod’s relationship with the body buried in the peat, and their bitter experience of Scottish Roman Catholicism.

Peter May’s writing in the  Lewis novels  has a literary quality that makes these books equal to the best authors writing in English in the twenty-first century. And, arguably, his prose is even better in Peter Forbes’ reading, which is superb – sympathetic, dramatic and intense in all the right places: a true tour de force.
* * * * *
© copyright 2013 AudioBooksReview. All rights reserved.
Buy The Lewis Man