The Deliverance of Evil by Roberto Costantini

At just under 22 hours of audio, The Deliverance of Evil is, by any account, a tour de force. Accolades 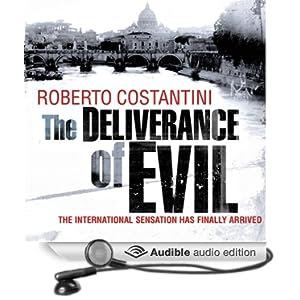 should go to the translator, N. S. Thompson, and to the reader, Saul Reichlin; both achievements are superlative and should be duly acknowledged.

The Deliverance of Evil is an epic book. Epic in sweep, in scope, in significance. As much literary fiction as genre fiction, this is writing of the highest order, and merits (indeed demands) rereading or revisiting. Some familiarity with Italian is an advantage – a number of the names, ranks, locations can confuse: twists and developments in the plot sometimes come so thick and fast as to bewilder. But the audiobook medium is perfect for rewinding and repeating. The density of the novel contributes to its greatness  – and to its appeal. Stick with it: the denouement is masterly.

On the day Italy wins the 1982 World Cup, a beautiful young woman is murdered. Fascist, misogynist detective Commissario Michele Balistreri, the principal character, is too preoccupied and dismissive to investigate at first. It is the first of a string of similar killings. And the crimes – unsolved –  live with him as we see him age and mellow, and mature. The story follows Balistreri’s life and the cruel deaths that haunt him, climaxing in 2006, just as Italy are about to be victorious at football once again. Who is it that murders young women and carves a single letter into their flesh? What is the killer trying to say? Can Balistreri ever discover the truth?

Political, relentlessly violent and deeply psychological, this is a book you will savour and recommend. And it is a book to which you will return, to understand better all that it contains.

Buy The Deliverance of Evil