The Galton Case by Ross Macdonald 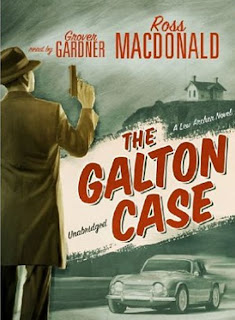 Ross Macdonald’s outstanding detective novels seem to have been somewhat neglected in recent years and have not received the attention and praise they deserve. This is set to change during 2013 with the reissue by Blackstone Audio of a series of recordings of the books narrated by the talented, award-winning Grover Gardner.

Macdonald wrote some eighteen novels featuring his ‘hardboiled’ private investigator Lew Archer set in the fictional California town of Santa Teresa, clearly a pseudonym for Santa Barbara, where Macdonald (true name Kenneth Millar) lived for thirty years until his death in 1983. His plots are almost as convoluted as those of Raymond Chandler, to whom comparisons are frequently made and Archer is as dry and tough as Chandler’s Philip Marlowe, but less self-consciously so. Macdonald/Millar wrote that his great literary influence was F. Scott Fitzgerald, and in The Galton Case there are clear hallmarks of the literary noir that characterises much of Macdonald’s later work.

As in a good number of Macdonald’s novels, the dysfunctional family is the principal focus. In The Galton Case Archer is set to discover whether a man claiming to be the twenty-years-lost heir to a Californian fortune really is the grandson of the grieving, elderly Mrs Galton. He certainly looks like pictures of his father, and has persuaded the naive daughter of Mrs Galton’s doctor that he is fine, noble and blessed. Archer isn’t so sure, and his dogged investigations eventually uncover a set of dark and violent truths.

The Archer novels are hugely entertaining and employ a vast cast of characters and situations that always intrigue and seem entirely convincing. Time passed in Lew Archer’s company will never flag.