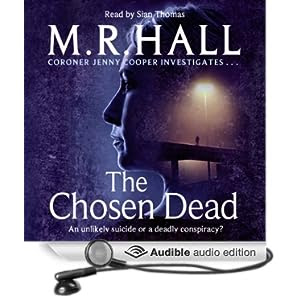 M. R. Hall’s take on the detective thriller is to have the protagonist a coroner, Jenny Cooper, who has investigative duties into suspicious deaths (‘a coroner examines all unnatural deaths which haven’t obviously been caused in the conduct of a crime’) and is independent of the police – answerable to no one but the Crown.

Her beat is Severn Vale, and so Bristol and south Wales figure largely in the series of novels, of which The Chosen Dead is the fifth. Her private life is complicated. She seems good at choosing some awful potential replacements for her equally dreadful ex-husband; all the while her son is growing up and making his own mistakes in the field of personal relationships. Jenny’s earlier reliance on anti-anxiety medication, bought on the Internet, here seems to have abated, but her nerves are put to their limits through her feisty and determined single-mindedness not to be deflected from her duties by the influential, the deranged, the Establishment, or the British secret services.

In The Chosen Dead Jenny is concerned, from a growing pile of cases, principally with two deaths: the apparent suicide of a young African aid worker who jumped into traffic from a motorway bridge, and the sudden death from meningitis of the young daughter of a family friend of her husband’s. The obnoxious and powerful civil servant Simon Moreton continues to try to keep Jenny in check, and there is a young and attractive spook who does her best to deflect her from discovering the truth amid all the nasty goings on at Britain’s chemical and biological weapons laboratories at Porton Down in Wiltshire, as well as in the global pharmaceutical sector. It gathers breakneck pace and there is genuine suspense as Jenny’s son becomes infected by a life-threatening antibiotic-resistant bug, thanks to his mother’s involvement with the perpetrators and whistleblowers.

The Chosen Dead is a thoroughly entertaining and gripping yarn and will not disappoint aficionados and new listeners alike. With but a single criticism. The opening reads as if it was drafted to accompany the title sequence of a film adaptation. It sets the scene, but it makes the book too much like a hundred other thrillers set in the glamorous past of the super rich and successful. The novel’s ‘backstory’ could, I suggest, have been revealed through newspaper articles Jenny and her sidekick Alison turn up later in the narrative. It picks up, of course, when Jenny Cooper takes centre stage.