The Omission by Kathy Golden 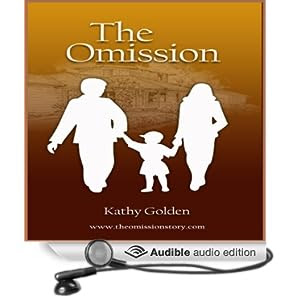 According to the author, this brief narrative (it lasts just over one hour) started life as an assignment in a fiction-writing class at the University of South Florida. It certainly indicates talent in narrative drive and structure, but whether it has become a valuable example of the art of audiobook is perhaps arguable.

The Omission revolves around the difficulty sixteen-year-old Jared Sanford Brown has in accepting that his parents have misled him about their own relationship as a couple and so the basis of the family he believed to be nuclear and conventional. His father is gay - a fact his mother knew from the start of their relationship. The marriage is a marriage only in name. The family a family only in name. And Jared cannot bring himself to forgive his father for the deception. He seems genuinely unable and unwilling to accept and embrace his father for what he is.

Most of the story centres on Jared's exile as he forges for himself his own decidedly heterosexual life – out of contact with his mother and father. His own marriage and forthcoming fatherhood, and his new wife's curiosity about her parents in law, force him, eventually, to seek to renew his relationship with his parents.

Read with great urgency and conviction by Dan Boice, this is a thought-provoking and controversial piece that will stimulate much contentious debate. What, for example, if it were not homosexuality that Jared discovers in his father but that he was Muslim … or a Republican?