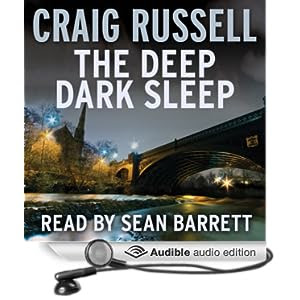 The honed wit and practised style of Craig Russell’s writing are nigh on perfect in The Deep Dark Sleep  – tartan noir at its best. And at AudioBooksReview we are impatient for the next instalment – and the next.


Sean Barrett’s reading is simply superlative. Your reviewer has the books, and it is good to see the narrative on the printed page, but for the full experience there is no substitute to having these dark, tangled tales read to you in a Scots brogue that rolls off the pages like the smog of mid-twentieth-century Glasgow.

The protagonist of Russell’s stories – Lennox – is the archetypal private investigator. With a dogged world-weariness that only a former special services operative from the Second World War can truly muster, Lennox is quick-witted, foolishly courageous and as much a crusader for moral truth as Raymond Chandler’s Philip Marlowe. He may seem less than scrupulous in his fortuitous couplings, but in the burgeoning romance with his landlady Fiona White his intentions appear to be, for once, effortlessly honourable.

When the remains of a man are dredged up sleeping the deep dark sleep at the bottom of the River Clyde, an initialled gold cigarette case seems unequivocally to identify him as ‘Gentleman’ Joe Strachan – Glasgow’s most notorious armed robber and the suspected killer of a police officer during an audacious and highly lucrative raid on the Empire Exhibition. The vicious late criminal’s twin daughters engage Lennox to establish who has been sending them cash every year on the anniversary of the infamous Empire Exhibition heist. Could their father really be alive and have lived incognito for so many years? The worst villains in Glasgow crawl out of the woodwork anxious also to know whether the body really is Strachan’s. As the investigation escalates, someone tries very hard to warn Lennox off the case with shows of deadly brutality. At the same time, Lennox is investigating a particularly seedy blackmail case, which is paying way over the odds. Could there be a link between the cases that Lennox is missing? Lennox has never before made so many dangerous enemies nor been so many times so near to death.

Russell is thoroughly self-assured and never dull. Amid a bleak and deadly Glasgow, full of mean streets and even meaner characters, there are bright flashes of humour. And style by the bucket load. Brilliant and unnerving, The Deep Dark Sleep is assured to become a classic of the genre.