Thursdays in the Park by Hilary Boyd 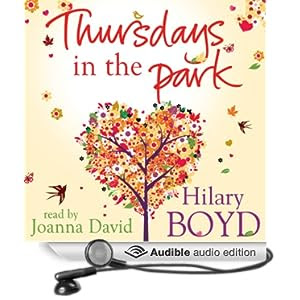 Descriptions such as ‘granny lit’ (from The Thunderer, no less)or ‘grey porn’ are embarrassing, otiose and, frankly, rather insulting to both the author and readers of this charming and entertaining romance. Affairs of the heart do not cease, not do they cease to provide material for good writing, at a predetermined age. With the majority of those born in the material North now predicted to live beyond one hundred years of age and with children born, one way or another, to women in their forties and beyond, to believe that love cannot be discovered beyond one’s twenties or thirties is ridiculous.

Thursdays in the Park is well written and peopled by  believable and identifiably human characters who, and situations which, make the reader want to find out what happens next  – the ages of the protagonists notwithstanding. And what more should be asked of a piece of contemporary writing? It could quite easily become a Radio 4 serial or afternoon play, a television dramatisation, or even a feature film: it is that good. As an audiophile, the present reviewer, perhaps needless to say, considers the narrated word the best medium. And Joanna David’s reading is exemplary. This is definitely audio book territory: it is a fine tale, plainly stated. And the sort of tale I, for one, prefer to have read to me – a perfect companion for a walk or a drive or a relaxing afternoon.

The story outline is probably well known now – thanks to the publicity the work has received. Jeanie’s husband of thirty years tells her one evening he no longer wants to share the marital bed. Ten years on, however, on a Thursday – the  day she takes her granddaughter to the park – Jeanie meets Ray, who is handsome, a good conversationalist, and, apparently, single. He seems to offer everything that Jeanie's husband George cannot or will not: George wants Jeanie to abandon her successful business, to leave the house they have lived in in Hampstead since they married and to ossify in retirement in the west country. She realises that with Ray life holds out so much more. But, can she extricate herself from family, from convention, from guilt?

There is so much to enjoy in this slight but satisfying listen that we cannot recommend it strongly enough. Any criticisms would only harp on the rather smug and cocooned comfortableness of the protagonists – Hampstead home owners and proprietors; married daughter a television producer with a bourgeois artist husband. Money, large houses and rather precious styles of life are taken for granted. In spades.

But, that said. If it is escapism you want. And romance at any age. Look no further.


© copyright 2013 AudioBooksReview. All rights reserved.
Buy Thursdays in the Park