My Secret Diary by Jacqueline Wilson 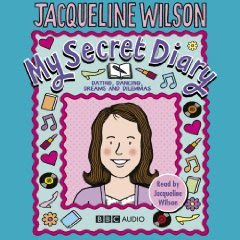 Adored and fêted by many a teenaged girl, this is Jacqueline Wilson’s account of her own schooldays and adolescence, growing up in Kingston upon Thames, south-west of London, in the 1960s.

What her young fans will make of it is difficult to imagine (and she does seem to have them in mind as she charts her own growing pains, ambitions and discoveries), but for older readers and listeners, this account of strict single-sex schools, austere homes and holidays, and unemancipated lifestyles will strike some painful memories.

Thoroughly entertaining, Jacqueline Wilson’s ambitions to write are clear right from the start - and we are never allowed to forget them. Her thirst for literature is thoroughly documented and displayed, although it is a shame that she rightly relates her admiration for Nabokov whilst at the same time telling her young readers to steer well clear of anything so corrupt as Lolita: as if she is afraid that championing such a masterpiece might get her into trouble, and that although she was mature enough to understand the novel’s subtle message, today’s youth would only confuse irony with pornography.

A great listen, and an honest insight into the mind of our greatest living children’s author.