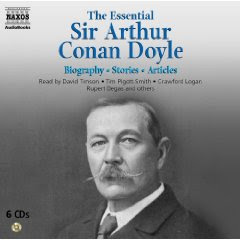 This a treasure trove and Naxos have to be congratulated for assembling such a rewarding choice of material and such a wonderful cast of actors to illustrate Conan Doyle's life and works - which, as the listener will discover, extends far beyond Holmes, Watson and Baker Street.

Conan Doyle's amost picaresque early life indicates just how random can be the course of a person's life. Always a raconteur and storyteller, Conan Doyle's might have been knighted as a Harley Street eye specialist and not as the multimillionaire writer he became, had his particular choice of medical specialism ever found a paying clientele. We are so fortunate it did not.

David Timson expertly reads The Adventure of the Speckled Band, apparently one of Conan Doyle's own favourite Sherlock Holmes stories - and surely as intriguing, inventive, and satisfying today as it was the day it was first published, and Carl Rigg builds great tension into the equally enthralling short stories Lot No. 249, about an Egyptian mummy, and The Sealed Room, about, well, a sealed room, containing a dark and tragic secret. Rupert Degas and Glen McCready bring us Brigadier Gerard and Professor Challenger from his neglected adventure and historical novels.

More fascinating still are Conan Doyle's spiritual and psychic interests, including the affair of the Cottingley Fairies - something worth investigating on the Internet, if you have never seen these remarkable photographs.

With a number of recordings of Conan Doyle's own voice, The Essential Sir Arthur Conan Doyle is a truly wonderful package and comes highly recomended for all lovers of the literary, historical, and the bizarre.