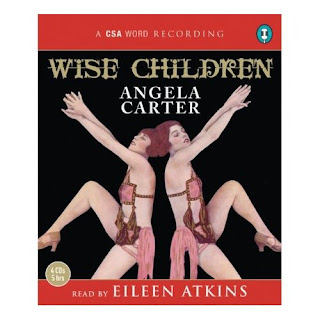 Angela Carter's last novel, Wise Children is a wickedly camp delight and a veritable masterpiece. The 'wise children' of the title (two of them, at least) are twin chorus girls, Dora and Nora Chance, and the story is an account of the mockingly bizarre theatrical dynasty of which they are a part. At the age of 75, they recount their own and their progenitors' weird and wonderous lives.

The novel is full of surreal and real individuals, and centres on fatherhood and paternal neglect, and the consequences thereof. Dora and Nora's 'illegitimate' lechery is both a delight and a horror and there is an underlying sadness in the midst of the satire. Based, one might speculate, on several grandees of the English stage and their extensive progeny- on both sides of the blanket - the novel combines Shakespeare with vaudeville, the circus and carnival, with telling asides at television and celebrity.

The centrepiece of the drama is the 100th birthday party of Sir Melchior Hazard - the greatest Shakespearian actor of his generation - a birthday he shares with the Bard himself but also with his twin brother Peregrine Hazard and Dora and Nora - the daughters Sir Melchior has never acknowledged. Twins abound, as do the themes of song and dance - and incest. There is never a dull moment, especially in the hands of the incomparable Eileen Atkins, who expertly brings all the marvellous characters, twists and turns to gaudy life. Quite simply, a modern classic.

What a joy it is to dance and sing.