The Adventures of Sherlock Holmes, vol. 2, by Arthur Conan Doyle 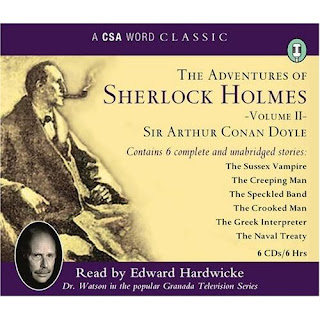 Magazines, books, films, television and radio have for more than 100 years brought us faces, voices, locations and atmosphere that many instinctively associate with Conan Doyle's famous detective - from Paget's somewhat posed portraits in the Strand Magazine to Jeremy Brett's brilliant, increasingly distrait 1984-94 Granada television series. Guinness World Records cites Holmes as the 'most-portrayed' character in film and television, with over seventy actors playing the part in some 200 productions in all parts of the globe.

But, the absolute joy of this CSA audiobook is that we hear Conan Doyle's own words - unabridged -and can treasure the conversations between Holmes and Watson, the wonderful dialogue, descriptions, plottings, and the complete 'world' produced by this master craftsman. Doyle may very well have tired of Holmes and desired to be associated with other things, but that does nothing to undermine the sheer brilliance of his story-telling - and it is the story-telling that displaces utterly all the dramatisations and adaptations which have plundered the tales themselves.

Edward Hardwicke's readings are unmatched in their brilliance. He really is a consummate narrator - and perhaps the definitive Watson (the supposed chronicler, of course, of Holmes' exploits). This is more than a delight. This is an absolute revelation to those of us who have not read the original stories. I cannot think of anyone better than Edward Hardwicke to read the stories - unabridged - in their entirety. For this listener, Holmes is more alive than ever - and more appreciated. I sincerely hope the rest of the canon may be given the Hardwicke treatment. He has the gravitas, a niggling cynicism but the refined acclamation which are Watsons' hallmarks - and the readings are endlessly entertaining.