The Barchester Chronicles by Anthony Trollope 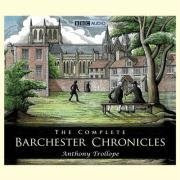 The BBC - both radio and television - has performed an inestimable service for Trollope by adapting a selection of his novels for broadcast. His seemingly innumerable books are now - more or less - back in print, and his reputation is enjoying a much-deserved favourable reassessment. Trollope was exceedingly prolific, and some say he tended towards the repetitious. But, if you ever find the time and inclination to immerse yourself in Trollope's oeuvre, you will be much rewarded, educated and entertained.

Trollope's literary talents tended towards characterisation and social setting, and his familiarity with ecclesiastical life pushed him to describes that quintessentially English institution, the Church of England. None the less, he knew how to portray women and their foibles, and those considered representative of the fairer sex are central if not predominant to his literary corpus.

This fully dramatised BBC radio collection is peerless and precious. Who other than BBC radio drama would assemble such a distinguished and talented ensemble to enact a literary gem such as this. Even the American theatre of the air humbles into shallow insignificance against the unparalleled and incomparable brilliance and talent of the BBC's radio drama company.

Barchester Chronicles is worth the licence fee on its own. At once and the same time serious, moving, thought-provoking, heart-warming, amusing, laugh-inducing, smile-promoting, ironic (if not parodying) and anticipating slapstick. Pure entertainment which will repay listening time after time.

This is radio at its very best: sheer joy from start to finish. And long may it continue.