A Passage to India by E. M. Forster 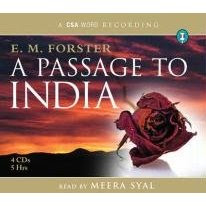 Forster seems to stay in fashion despite his arguably outdated preoccupations with class, manners, sexuality, mysticism and, in the case of A Passage to India, colonialism and independence.

There is a misogyny in A Passage to India which is transmuted into depressed (not exactly repressed) homosexuality in his other books and even deliberately suffused in Howards Ends - perhaps his greatest work. But A Passage to India is so much more than the excellent film with Nigel Havers and Art Malik and it is the prose which makes this such a fine piece - not simply the characters and the story - which are arguably rather trivial, despite the seriousness of the situation and of its consequences.

The Cambridge critic F. R. Leavis described A Passage to India as 'a classic of the liberal spirit', and his preoccupations in this important and quintessentially English novel are liberal - socially and politically. However, what brings this novel alive, stimulates one's enthusiasm and makes one reach for the next disk, is not so much the unravelling plot and the predictions of what will befall the former colony, so much as the outstanding reading by Meera Syal, who brings such depth, understanding, delicacy and plausibility as to make the whole novel enthralling, fresh and alive - an outstanding performance which has done so much to bring me, for one, back to Forster. I hope she will find the time to give many more novels her sensitivity, dramatic intelligence and wondrous talent for characterisation.