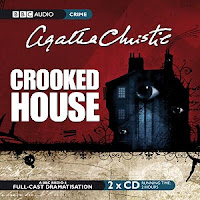 A darker, maturer, sophisticated novel, Crooked House entitles Agatha Christie rightly, I believe, to the much over-used title 'Queen of Crime'. Originally published in 1949, this book was reported to be one of Christie's own favourites of her predigious output.

The morally corrupt Leonides family, headed by wealthy entrepreneur Aristide Leonides, is sent into turmoil at his death at the age of 85. He has been murdered, of course. And has recently changed his will. The prospective heirs - all suspects - rattle around in the eponymous crooked house.

With Brenda Leonides, Aristide's much younger second wife allegedly having an affair with Laurence Brown, the conscientious objector /private tutor to her children Eustace and Josephine; Aristide's unmarried sister-in-law, the repressed and embittered Edith de Haviland; failed businessman Roger, the eldest son from Aristide's first marriage, and his austere scientist wife Clemency; not to mention Roger's younger brother Philip, and his 'modestly successful' actress wife Magda, there are plenty of possible suspects. Sixteen-year-old Eustace and his unprepossesing detective-story-obsessed twelve-year-old sister Josephine are at the Jamesian Innocents vortex.

The children's nanny dies after drinking a digitalis-laced cup of cocoa that had apparently been intended for Josephine. Then, Edith invites Josephine to come out with her in her car for an ice cream soda, only to drive off a cliff.

The stuff, perhaps, of comedy. But not in Christie's hands. With an excellent cast including Rory Kinnear and Anna Maxwell Martin, this is radio drama at its very best and demonstrates just why Agatha Christie is still packing them in in London's West End, still getting viewers in the millions for television dramatisations, still selling palette loads of paperbacks and still prompting radio producers to commission adaptations.