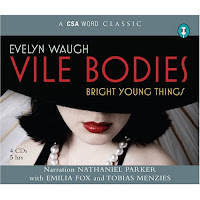 Written by Evelyn Waugh at a time when he desperately needed money and when his marriage had collapsed, Vile Bodies is sometimes considered too spontaneous and episodic and so lacking narrative continuity. But this is where its genius lies. You genuinely have the feeling that 'all that succession and repetition of massed humanity. All those vile bodies' repulsed and attracted simultaneously , that all that indulgence was for real, but that there could be no other way of telling of such goings on.

Satire is a loaded die, and Waugh seems to go in and out of fashion. However, there is so much to enjoy and to understand in this biting condemnation of a society that has gone out of control and is about to face an even greater fall from grace. An end of an era portrait of decadence and moral decay but narrated with constantly amusing inventiveness, Vile Bodies is one of Waugh's masterpieces.

This CSA Word adaptation could not be bettered. Waugh's quickfire repartee and soulful pathos are brilliantly recreated by this group of talented performers. If you have only ever tried Waugh's Brideshead, you are in for a shock and a delight. If you once read Vile Bodies, you will savour and relish anew the wonderful prose which can move you to tears of humour and loathing.