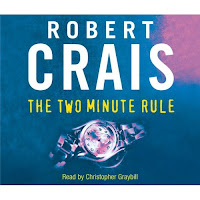 Robert Crais has a justly deserved reputation not only for great characterisation and plotting but for literary style. With masses of crime fiction being written and consumed in the twenty-first century, Crais is up there with the greats of the current and the classics of the twentieth century. He will be read long after some of his better-known contemporaries are gathering dust on library shelves.

The Two Minute Rule is an absorbing and addictive story of an ex-con, out of jail after serving time for bank robbery, coming to terms with his policeman son's recent death. His suspicions are aroused concerning the exact details of the death - especially the role of his son's police colleagues in the incident. Who can he trust? Who will trust him?

Read with great skill by Christopher Graybill - a master of the audiobook art, this is one audiobook that will have you going back for more.