A Giant Slice of Horrid Henry by Francesca Simon 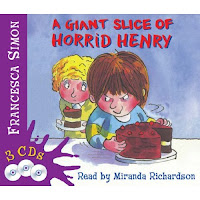 The commonest comments on the audiobooks that pass through the AudioBooksReview office concern packaging: there is no standard case for CD audiobooks; for one thing, they vary from a single disk to twelve or more, with unabridged recordings. The hard clear plastic jewel cases adapted from music CDs invariably crack during shipping, hinges break off once they are opened and their sharp corners scratch anything they are put down on. The taller DVD boxes that have been adopted by some American audiobook publishers are an improvement, especially when the disks they contain are recorded as MP3s, which vastly reduces the number of disks required. Orion, publishers of A Giant Slice of Horrid Henry seem to be making progress - with tougher plastic cases (with rounded corners) and a single spindle. A Giant Slice of Horrid Henry, has its own, special packaging, however - and the audiobook is worth having for the packaging alone: thick board binding, individual card sleeves for the CDs, wonderful colours and illustrations - a real joy to possess and a perfect gift.

The stories are dangerously entertaining. Horrid Henry, if you don't know him, could be thought of as William Brown's younger but very twenty-first-century brother. Need I say more?

The music by Peter Rinne and Dik Cadbury is inspired, and there is no one better suited to read these stories than the incomparable Miranda Richardson. Definitely not to be reserved for children or for parents: I can't think of anyone who couldn't enjoy Henry and his exploits. A triumph all round.