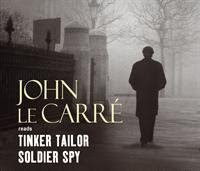 There is a wistful sadness in all of le Carré's novels - a yearning for might have been and a brooding pessimism in anticipation of what might yet be. Quintessentially English (not really British), characters in le Carré are distant, hiding behind barely concealed grimaces imposed by class, pretension, envy, bitterness, dread of the faux pas - any hint that will reveal you for what you really are rather than what you pretend to be.

George Smiley represents the downtrodden butler, serving a distasteful and ungrateful master, struggling pointlessly to maintain the status quo in a world overtaken by even more ruthless and cruel foes. Smiley vainly attempts to tent all the animals in the Circus, but they stubbornly refuse to be brought to heel. Spy stories they may appear to be, but le Carré's novels are much, much more - profound morality tales exploring and explaining post-war social and political life and culture, and essential reading for anyone with an interest in politics, domestic and international, past and present.

Read by the author, you will want to hear all his works in the audiobook format - even if you have read them before, or seen the acclaimed BBC television adaptations.