A Small Town in Germany by John le Carré 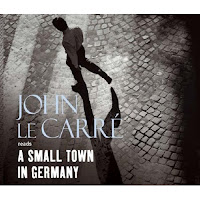 Worth buying alone for le Carré's introduction in which he gives his recollections of East-West relations at the end of and after the Second World War. A Small Town in Germany captures all the insecurity, paranoia and fear of the 'cold war', of spies and of divided or misplaced loyalties. Le Carré's patrician reading, with his interjection of Russian or German, has the icy determination of the professional interrogator and the cold, doomed sadness of the betrayed and betrayer.

This feels like the real thing - and le Carré's career as a 'British Foreign Servant' makes you believe that his books are more history than fiction. No James Bond nonsense here, a 'Junior Something' in the British Embassy in Bonn - a man with something of an unchecked past - goes missing at the same time as do forty-three Confidential files, just as student unrest and neo-Nazis start to resurface on the German streets. London sends in Alan Turner, ruthless and efficient, to find out what is really going on.