A Most Wanted Man by John le Carré 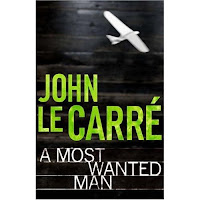 There are no moral absolutes in the spy trade. Indeed, morality of any kind, like the law in action, seems to depend from whose perspective matters are viewed - perceived perpetrator or perceived victim. In A Most Wanted Man—a grim and characteristically depressing novel—le Carré introduces a predictable cast of 'moral-less' characters: bankers, lawyers, government servants and zealots (religious and political), this time sweeping up Western paranoia and ‘extraordinary rendition’, fundamentalism and jihad.

Hamburg, of course, is where much of the 9/11 plot was cooked up (if we believe the official version). So Hamburg is the perfect setting for this twenty-first-century parable, combining the cold war of so many of le Carré’s earlier masterpieces with the new ‘war on terrorism’ used to justify any violation of international law or international convention by ‘the coalition of the willing’ and its lackeys.

Expertly deft at keeping the reader guessing, le Carré writes exceptionally fine audiobook material. And to have these stories read by le Carré himself is revelatory—introducing nuance to words and phrases which might on first reading be passed by in the race into the inevitable abyss of denouement.

Buy A Most Wanted Man