Lightly dismissed as ‘middle-class catastrophes’ and ‘cosy disasters’, John Wyndham’s novels, written chiefly in the 1950s and 1960s, are still chillingly shocking and disturbing dramas that make the reader question what we, as humans, are doing to our planet and, crucially, whether we are alone in the vastness of those universes beyond our own. 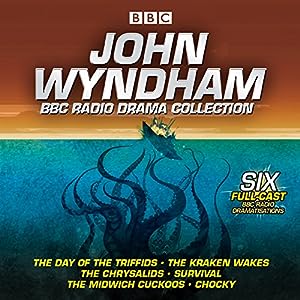 The Day of the Triffids, The Kraken Wakes and The Midwich Cuckoos are probably read less now than at any time in their publishing history (although it is interesting to see that H. G. Wells’ War of the Worlds is currently on one GCSE English Literature syllabus). Wyndham’s novels are, perhaps, ‘an easy read’, but much of their appeal is the way he turns upside down a tranquil world where the last thing on people’s minds is the thought that anything could prevent life from continuing as it had done since the turmoil and upheaval of the protracted end to the Second World War.

These BBC radio dramatisations are enjoyable first of all for the retelling of the novels, but then for the insight we are given into the radio writers, actors, producers and audiences at the time of the original broadcasts. The accents of the lead actors in The Day of the Triffids, for example – Gary Watson, who made his name in countless television dramas, and Barbara Shelley, famous for her Hammer Film roles (playing Bill Masen and Josella Playton)  –  sound to modern ears frightfully cut glass. Few actors today would even attempt such accents, but they are perfect for this post-war apocalypse (dramatised by BBC radio drama pioneer Giles Cooper and first broadcast in 1968). But that is part of the appeal of this collection.

A fascinating feature of The Day of the Triffids is that the transcriptions are episodes shortened for sale to foreign broadcasters, most of whom needed time for commercials. Anything deemed ‘inappropriate’ for a overseas audience was routinely cut. Twelve minutes of the deleted material is included here on the final CD of Triffids.

Of the other broadcasts, The Kraken Wakes, from 1998, is rather prescient in the light of the rise in sea levels through global warming. As the Thames breaks its banks and then submerges the Houses of Parliament, the listener is left realising that this modern-day Noah’s Flood is perhaps not so far-fetched.

Chocky (from 1998) is fascinating, as a schoolboy communicates with an entity from the future, a ‘girl’ (although there is only one gender on her planet) who is trying to impart the secrets of an energy source that will save the Earth from eventual destruction. Fables of Nikola Tesla’s inventions and conspiracy theories that the petro-chemical industry in the USA tried to interfere with work on the electric car all spring to mind as twelve-year-old Matthew is kidnapped, hypnotised and threatened when it is revealed that he may be the conduit for a new science emanating from a different world. The dramatisation is gripping and absorbing and John Constable’s script is excellent, building as it does to its inevitable denouement. John Tydeman produced a version for BBC Radio in 1967; it would be great to be able to hear that version too.

Perhaps the best of the six here is Dan Rebellato’s 2003 production of The Midwich Cuckoos (again, there was an earlier version by William Ingram). Bill Nighy and Sarah Parish are perfect as Richard and Janet, who are fortunate enough to stay away from the village of Midwich on the night when all the women, young and old, married and single, find themselves ‘with child’. Controversial for its time, and disturbing still today, issues of abortion, eugenics and egg-sharing are not far from the surface of this intriguing and disturbing mystery, displaying just how current Wyndham still is in the second decade of the twenty-first century.