A Touch of Frost by R. D. Wingfield 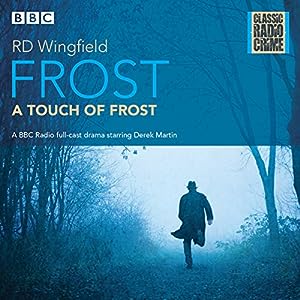 Although best known now for the ITV series which ran from the early 1990s to the 2010s starring David Jason, Detective Inspector Jack Frost was the  main protagonist in a gritty novel, rejected by publishers Macmillan in 1972, that R. D. Wingfield turned into a radio drama for BBC Radio 4.  Currently unavailable, Three Days of Frost saw the Inspector investigating child abuse and murder in a city named Denton – a provincial locale in the grimy nowhere of the north of England. In 1982, Frost reappeared in A Touch of Frost, and a legend was created.

Starring Derek Martin as Frost, with Haydn Wood, Stephen Thorne and Alan Dudley, A Touch of Frost is very much of its time in terms of attitudes to, for example, Women Police Constables (as they were referred to then), women in general, and teenagers and their parents. But the writing is first class, full of psychological tension, gritty reality and palpable despair. Despite working on cases involving a multiple rapist, a sleazy and corrupt club owner and the distraught parents of a runaway schoolgirl, Frost gets his man in the end. He even gets his paperwork in on time – just. But not, of course, without alienating his colleagues and superiors.

Running to only just under 90 minutes,  A Touch of Frost is a perfect way to while away a tedious car journey and it leaves you wishing that more of Wingfield’s work could be made available from the BBC Radio Archive.

Buy A Touch of Frost