The Spire by William Golding


The Spire is a disturbing, provocative and profound novel. Not a long read, but a book with a long emotional and spiritual reach. And, like the spire itself, grounded perhaps less than firmly on earth but aspiring heavenwards. 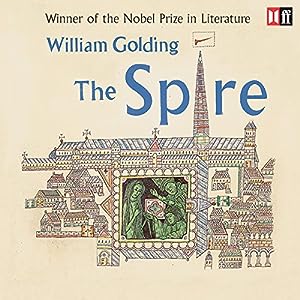 The story is simple, the message needing to be carefully teased out. It charts the decent into theological disorder and human madness of Jocelin, a cleric with the vision of a massive spire for his cathedral. Consumed and motivated by hubris and pride, and tormented by demons of envy, lust and despair, Jocelin brings social and psychological chaos to the claustrophobic community of masons, workers and fellow clergy in his parish as he chides, bullies and blackmails those around him to construct his monumental ‘bible in stone’. His blind foolishness, said to parody that of the cleric responsible for the spire at Salisbury, with its virtually non-existent foundations, is a metaphor for faith, and faith’s doppelgänger, doubt, and provides a rewarding if unsettling listen.

Jocelin is a vain and poorly educated man, full of ambition and conceit, driven it would seem more by his sense of his own self-importance than by care and concern for the Church and its flock. He can barely read, let alone know anything as technical as the mason’s art. He demands that his own image is displayed in stone on the spire, while he mocks the lives of those below to whom he considers himself superior, as if he is experiencing his own life on a higher spiritual plane.

In so many ways, this satire on the established church mirrors Golding’s targets in his other novels: taking a simple truth and stretching credulity to the far reaches of mankind’s conceits. And Benedict Cumberbatch’s commanding reading more than justifies the public acclaim he currently enjoys. May he read many more such masterpieces.