A Dark Inheritance by Chris d’Lacey

A Dark Inheritance is the first in a projected series of young adult ‘fantastic fiction’ books from Chris d’Lacey, the author of seven novels under the title The Last Dragon Chronicles. 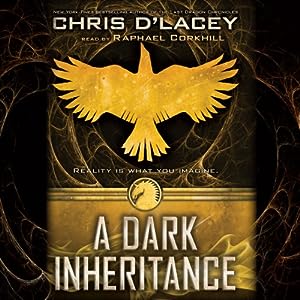 There is a lot to enjoy in the twists and complexities of the circumstances in which young Michael Malone finds himself following a chance cliff-top encounter with a suicidal husky. From an ordinary schoolboy, Michael is audaciously transformed into someone with supernatural abilities and joins UNICORNE, which appears to be a covert organisation involved in investigating strange and paranormal phenomena.

With a great dramatis personae  – ‘Mom’ Darcy (placing the story in the USA, although much else feels decidedly English); younger sister, Josie, (aged ten, who both doesn’t play the violin and (in a parallel universe) is a virtuoso); prominent-cheekboned, au pair/ teacher/ martial artist Chantelle; goth schoolgirl Freya (who is dead and then undead); Amadeus Klimt, creepy head of the covert organisation UNICORNE; and, of course, Michael.

Much in the book demands a re-read because the shifts in the narrative make it difficult to know just what is true and then what is going on in an alternative reality. Central to the story is the disappearance of Michael’s father three years ago, and the first line of the story indicates that that is unquestionably what the plot is going to reveal: ‘One day before I began to wonder if my father was still alive.’ (Whether such syntax should be encouraged in a book for adolescents is another matter entirely.)

Nonetheless, I feel sure A Dark Inheritance and its successors will fill many a Christmas stocking, whether in paperback, on kindle, or in the fabulous audiobook narrated by Raphael Corkhill, who manages to bring all the characters to life (even the dead ones) and makes one want to listen through to the very end   – and then to wish for further adventures still. I hope we will hear a great deal more from this actor.