The Silkworm by Robert Galbraith

Galbraith (Rowling) pulls it off once again in this pacy macabre thriller where we find out yet more about private detective Cormoran Strike and his complicated family relationships. Things develop also where his assistant Robin is concerned, with her appalling fiancé Matthew. 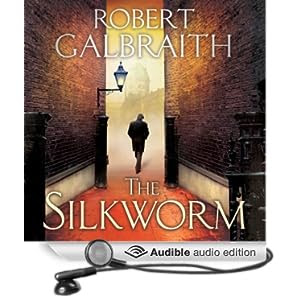 With literary satire on the agenda, and the plot revolving around an unpleasant collection of publishing types, it is clear that Rowling is settling a few scores from her painful rise to fame and fortune.

Strike is asked by the wife of a controversial man of letters to locate her husband, Owen Quine, who has quite simply disappeared into London’s wilderness. A copy of what purports to be his latest work, Bombyx Mori, has been ‘leaked’ and it turns out to be like something from the pen of the Marquis de Sade, depicting cannibalism, rape, torture and necrophilia, its protagonist consumed, literally, by a cast of characters resembling many from Quine’s life and who he maintains are responsible for his ruined career.

The book is tantalising, fascinating and satisfying. And it makes a great listen, read as it is with skill and deft timing by Robert Glenister.

The only cavil would be the ponderous and pretentious epigraphs that lumber the chapter openings. Fine on the printed page, they are a self-conscious element of the style of the work, to be sure, but they make finding one’s way around the audiobook difficult and frustrating.
* * * *
© copyright 2014 AudioBooksReview. All rights reserved.