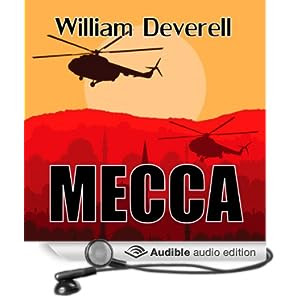 In another characteristic Deverell case of corruption, intrigue and politics, Mecca is an astounding tour de force of fast-paced drama and black humour. The complexities of the plot are too convoluted to summarise, but there is plenty here to intrigue, to surprise, to amuse and to entertain.

Slack Sawchuck realises his life in Cuba is at an end. A former member of a political pressure group, he attempts to sidestep an American arrest warrant by flying to Canada. On the plane, relaxing with his second drink, Slack falls into confident conversation with the guy in the next seat. His nonchalance comes to an abrupt end, however, when he realises the man is on the plane to take him into custody.

But, in typical Deverell style, it turms out that Slack’s lawyer has swiftly managed to organise a full pardon for him, with pension –  if he agrees to help the Feds and infiltrate the Rotkommando to find out what the so-called Mecca operation is all about. Then the fun starts.

Once again, Steve Scherf and Beverley Elliott put in bravura performances – breathing new life into sometimes forgotten or neglected works. I’d like to hear this couple tackle some hard-nosed pulp detective stories. Their approach to the audiobook genre is genuinely groundbreaking – producing more a radio performance than a simple narration. Talented and enterprising, this is exactly the way the medium should be moving in the twenty-first century.