The Goldfinch by Donna Tartt


Donna Tartt’s Jamesian third novel, The Goldfinch, at almost 33 hours, continues a recent trend for length rather than brevity that perhaps reflects a taste for the good long read (Booker prize winner The Luminaries, by Eleanor Catton, springs to mind) that many had been prophesying had passed. 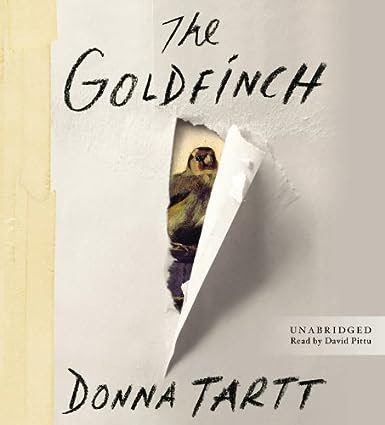 Tartt’s first novel, The Secret History, was a masterpiece of plotting, characterisation and place: its principal characters having the self-assurance that only moneyed Americans in the twentieth – and twenty-first – centuries seem in a position to have (it is astonishing to realise that The Secret History appeared in 1993). Theo Decker – the protagonist of The Goldfinch – loses his mother at the beginning of the book, but, although he spends time with his father before he too dies, his formative years are spent in the old, rarefied, enduring society that lives far beyond the realities of Obamacare, banking collapse and repossession of which the land of the free should be so ashamed. And while the ipod, the mobile phone and Google are there, it is important to the plot that Theo, with phone battery dead, cannot slip the sim into a cheap prepaid phone, nor find Dutch newspapers translated online so that he can follow the consequences of what has just happened to him in Holland. One feels that Tartt wishes herself and her characters were indeed living the lives of the privileged of nineteenth-century America. Perhaps that is exactly what her own wealth has brought and bought her.

The melancholy of this book is almost overwhelming: the closing pages especially full of sadness, regret, bitterness and sorrow. Clearly, extraordinary things happen to extraordinary people if circumstances allow. And Theo’s personal journey is certainly worthy of more than thirty-two hours of anyone’s time. Tartt’s wonderfully distinctive (and probably easily parodied) style that so entrances in The Secret History is here once more: the lengthy, semi-coloned lists; the expensive and exclusive brands unselfconsciously scattered throughout the text; the countless significant and ‘signifying’ restaurants, stores and artefacts with which the novel is embroidered; the drugs and binges, narcotic overdoses and near deaths. And money is everywhere: Park Avenue money, ‘old’ money; money from the doorman; drug money; gambling money; money looked after by lawyers; money for antiques extorted from rich gullible wives or artless bankers; bribes, swindles, loans, rewards, thefts. Rarely is there any shortage of money: the ‘bridal consultant’ from the wedding registry at Tiffany’s personifying, with a tasteless lack of irony, such cupidity. In an almost Fitzgeraldian world, Tartt’s characters are allowed to slum it with bad boys, gangsters and drug dealers because in the end they can retreat back into their money or their vast carelessness.

But it is worth the read, because Donna Tartt has, again, created a world as believable and as revisitable as it is distasteful. And Theo’s despair is real and meaningful – and a melancholy paean to the immortal nature of the painting of the goldfinch of the book’s title:


‘And I feel I have something very serious and urgent to say to you, my non-existent reader, and I feel I should say it as urgently as if I were standing in the room with you. That life – whatever else it is – is short. That fate is cruel but maybe not random. That Nature (meaning Death) always wins but that doesn’t mean we have to bow and grovel to it. That maybe even if we’re not always so glad to be here, it’s our task to immerse ourselves anyway: wade straight through it, right through the cesspool, while keeping eyes and hearts open. And in the midst of our dying, as we rise from the organic and sink back ignominiously into the organic, it is a glory and a privilege to love what Death doesn’t touch.’

The recording is outstanding, and David Pittu deserves an award for the reading. He gets the characters brilliantly, from Theo to Boris, Xandra, Mrs Barbour and Hobie. And although The Secret History benefits immensely by being read by the author (The Little Friend also, which I have heard read by two different actors in its entirety but which pale beside Donna Tartt’s abridgement for Bloomsbury), it would be hard to better Pittu’s paced performance, which will echo in your imagination long after the final sentence.