It’s All About Treo by Dave Heyhoe (with Damien Lewis) 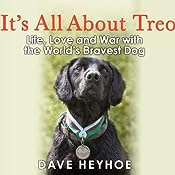 Accounts of the reasons for American involvement in Afghanistan, supported by the British and other allies, have varied over the twelve-year course of the conflict. Part of the American ‘war on terror’ following the events of 11 September  2001, the campaign in Afghanistan later morphed into a campaign against the Taliban, a war on the growing of the opium poppy and even an ideological struggle in support of the right of girls and women to have an education. Only when history is written a hundred years hence will the truth emerge.

One thing is certain, however, and that is that warfare has changed fundamentally since German and British forces faced each other across no man’s land in the Great War a century ago. Guerrilla and ‘insurgent’ forces play today by very different rules, and one of their most terrifying weapons is the improvised explosive device, which is responsible for countless injuries and deaths in the twenty-first century theatre of war.

Dave Heyhoe, of Ranger Company, the Royal Irish Regiment, is posted to Afghanistan to help detect the roadside bombs and booby traps that make every soldier’s work immeasurably harder and infinitely more hazardous. Fortunately, he is not alone. Dave’s black labrador Treo, a member of the Arms Explosive Search dog team, is his constant companion, and the star of the book.

It’s All About Treo:Life and War with the World’s Bravest Dog is an absorbing and at times very moving account of the skill and dogged determination of Treo and Dave, as they front foot patrols scanning for explosives and other devices in the notorious Helmand Province. Treo is so successful that soon enemy communications traffic is thick with chatter referring to the ‘Black Dog’, as Treo and Dave become major targets for enemy fire. Snipers train their sights not on troops but on the dog that is scuppering all their dastardly work. Scraps of food and even other dogs are set as distractions and bait. And in the unrelenting heat in the field, man and dog are under enormous pressure: expectations are great and there is no allowance for mistakes.

It’s All About Treo is a great deal more than just another heart-warming tale of ‘one man and his dog’. Here loyalty, proficiency, discipline, training, confidence and single-mindedness all work together to make a team with more sensitivity and focus than any machine could muster. With a few initial points to prove and scores to settle, and more than one tragedy to come to terms with, we learn how, in the end, everyone is impressed by, grateful for and trusting in the outstanding teamwork that has won well-deserved decorations, fulsome praise and much-merited retirement for Dave and the indomitable ‘Black Dog’ that is Treo.

Malcolm Hamilton’s reading brings all the spell-binding drama, tension, joy and sadness of this wonderful story to life.  A brilliant account, It’s All About Treo confirms the almost unbelievable bond that is possible in man’s centuries-old relationship with the domesticated descendant of the wolf.
* * * * *
© copyright 2013 AudioBooksReview. All rights reserved.