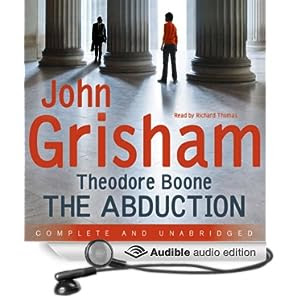 When Theodore Boone, the first novel to feature Grisham’s young would-be lawyer, appeared, it was met with almost universal delight. Grisham had created a feisty and interesting character with what seemed to be terrific potential for a series of novels that would satisfy young and old alike. And might even encourage the print-phobic adolescent to turn a few pages for a change. As an audiobook for families to share, Grisham seemed to be on to a winner, and the book confirmed his reputation as a great storyteller who could match character and human interest with pace and plot.

So it is a great disappointment to reveal that the follow-up, Theodore Boone: The Abduction, is not up to scratch. In truth, it is what is commonly termed ‘a turkey’.

Theo’s best friend April disappears from her bedroom in the middle of the night and no one, especially the local police, seems to have the slightest idea what to do to find her. Theo knows that she was home on her own the night she disappeared since her dippy hippy mother had failed to return for a few days and her rock star wannabe dad, as usual, was living his life elsewhere. But we are given all these facts at least three times in as many chapters as the story stalls and goes nowhere. And that is virtually all the story there is. We do have a minor red herring of a distant cousin pen pal, recently released from jail, who happens to turn up in the area and who starts to milk the girl’s disappearance to his own advantage. But Theo’s supposed legal expertise isn't exploited in the least, unless you include a completely irrelevant outing, again, to Animal Court, which was so entertaining in the first story, but which here is simply filler.

Slow, unexciting and predictable, this would not have been published if it didn’t have Grisham's name on the cover. Let’s hope he isn't franchising his name like some authors we could mention and failed to check what had been put out under his famous brand.

A third outing is due out later this year. For Theo’s sake, do better this time John or you will fast start to lose  your considerable and lucrative following.