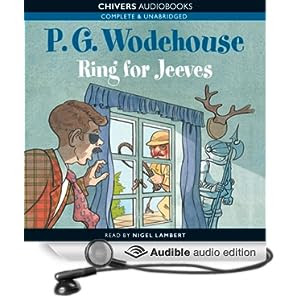 Originally published in 1953, Ring for Jeeves depicts a post-war Britain in which the landed gentry have to go out to work, where servants are a rare beast and the stately home is a dilapidating burden fast falling down around the ears of its Lord and Master and succumbing to a fate of disrepair and neglect through lack of funds.

Times are hard: the jaunty music is gone. Ring for Jeeves opens with spoken text, once again expertly dramatised by the richly talented Martin Jarvis. Bertie Wooster is barely given a mention in this tale. He has enrolled in a school that teaches the idle rich how to fend for themselves - how to darn their own socks, for example – and taking along a gentleman’s gentleman is absolutely forbidden. In the mean time he has allowed Jeeves to offer his services to William Egerton Bamfylde Ossingham Belfry, the Earl of Rowcester – ‘Bill’ – whose stately home, Rowcester Abbey, is on the market as the Earl clearly cannot afford its considerable upkeep - not since the ‘Socialisation’ of Britain.

The amusing and absorbing plot revolves around wealthy American widow Rosalinda Spottsworth, who is interested in psychic phenomena and is in England with a view to buying the Abbey (especially if it proves to be haunted). The central theme is Mrs Spottsworth’s romance with African white hunter Captain Biggar, who met and fell in love with her on a hunting expedition when Mr Spottsworth (Rosalinda’s second husband) was killed. Captain Biggar’s problem is that his code of conduct (and that of his chums in Africa) would not allow a man of few means to propose to a woman of many. And Mrs Spottsworth is very rich indeed. Of course, Captain Biggar’s fortunes would be much fairer if the bookie he had made a complicated bet with had not scarpered before paying out his £3,000 winnings. Only we the listener know that said bookie is none other than the Earl of Rowcester himself, heavily in disguise and aided and abetted (so to speak) by the indomitable Jeeves. Up until Captain Biggar’s lucky bet, he had been doing rather well and had even been able to afford servants at the Abbey. Little wonder he made a quick escape: he is clearly on his uppers.

Soon Mrs Spottsworth, followed by Captain Biggar, who has been pursuing the bookie’s car, arrive separately at the Abbey and are, naturally, invited to stay. To complicate matters, however, Bill and Mrs Spottsworth, it turns out, had met and dallied when they were a little younger, in the South of France, much to the dismay of Bill’s jealous fiancée Jill Wyvern, whose father happens to be Chief Constable of the county.

There is a lot more, of course, involving pendants, unplaced bets, horse whips, creeping damp and a London store called Harrige’s. Suffice to say, Jeeves comes up in the end with a solution that satisfies everyone, Bertie Wooster gets expelled for cheating and asks Jeeves to return and all’s well that ends well.