Tracks of My Years by Ken Bruce 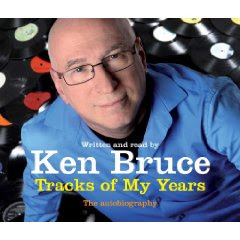 Ken Bruce made his name hosting one of the most popular shows on 'the most listened-to radio station in the United Kingdom', Radio 2 (once known as The Light Programme and now much more akin to its younger brother Radio 1).

Tracks of My Years makes for great listening, even if you are not an aficionado of Radio 2 and know nothing of its internal politics. Bruce's journey in broadcasting is fascinating and will intrigue anyone who values the power and strength of radio. His first, unsuccessful  interview at the BBC in Glasgow, his unhappy apprenticeship as an accountant (who now, it is rumoured, actually run the BBC) and a more lucrative job in the newly arrived car hire business eventually allowed Ken Bruce to start in hospital radio and finally enter the hallowed portals of BBC Scotland as a humble continuity announcer. A lot of it was luck and being in the right place, etc. But, clearly, talent will out, and Ken's career was a gradual progression up the spiral staircase of ambition.

On-air and off-air calamities and shenanigans are charmingly recounted.  Radio and television have always been full of larger-than-life characters and personalities, and Ken has met all of them in his time. Most of the big names of broadcasting in the 70s, 80s, 90s and beyond pop in and out of this autobiography. The drinking is Roman in its excesses. Ken's four marriages illustrate the other hazards to innocent bystanders.

Some of Ken's comments on Radio 2's recent habit of giving the airways to personalities rather than professional broadcasters are abridged from the audiobook: 'Loud, larger-than-life performances work in clubs and theatres, but not on radio. Managements have lost their gifts as talent-spotters and are too content to rely on a proven public profile to garner an audience. There are very few young broadcasters coming up in the way I did, being allowed to do a music programme with no format.' Management would do well to heed Ken's comments, or radio will cease to do what radio broadcasting does best - and what Ken Bruce does best - foster and keep a loyal and entertained constituency over a lifetime. And, despite recent rumours in the press, let's hope Radio 2 will still find time for Ken Bruce and his like before radio becomes television without the pictures.

Buy Tracks of My Years