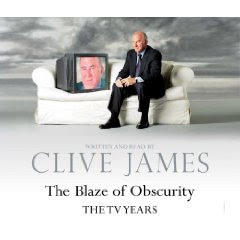 Listening to this peerless volume of reminisces, one realises just how much broadcasting has declined in the last ten years since Clive James was writing and fronting mainstream television.

He appears effortlessly articulate, in a way that current broadcasters are not. Even the BBC allows people on the air who think 'media' and 'criteria' are singular nouns, and who abuse English as if it did not matter. These young graduates, most of them from Oxford and Cambridge, simply cannot read and write. James, on the other hand, Australian through and through, is clearly a man for whom the written and broadcast word really are important, and his sometimes derided contributions to the medium of television are sorely missed. Such writing and broadcasting are now unfashionable and unwanted. Think of today's highest-paid television 'personalities'. Listen to how they speak and to what they talk about; then listen to five minutes of Clive James. It is a different country - and today's output is no matter for congratulation and admiration: Clive James cares about what he writes about and the way he writes. Today's broadcasters, and those who consume what they produce, could learn a great deal from him.

This fifth volume of memoirs charts the end of James's television career and includes some telling observations on colleagues and bosses, including the elusive Alan Yentob, the agendist John Burt and the facilitating Michael Grade. It really was 'The Golden Age of Television' and we will never see the like of Clive James again, combining wit with wisdom and succeeding so brilliantly. It must have been a wonderful time to be in television, especially if you had the support of those in charge. The mass audiences he achieved are the stuff now only of dreams. There was so much of the world to explore and to film in those days: small wonder that Clive James's 'Postcards' were so popular and successful. He was the first to bring to the British small screen the masochism of Japanese game shows, the seductive delights of Copocabana and the solipsisms of New York. Nowadays, cheap flights and cheaper television have given everyone the opportunity not only to go and look but to take part in the world's absurdities.

We are lucky still to be able to sample Clive James the reflective commentator, the poet and the lover of women. His website remains a source of tremendous pleasure, and his new weekly Radio 4 spot reminds us just what an inimitable mind and voice we have been lucky enough to share over the years.

Buy The Blaze of Obscurity