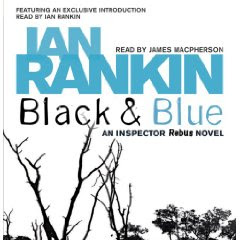 Darker and larger in scale, Black & Blue is one of Ian Rankin's greatest and richest novels, featuring Detective Inspector John Rebus, read with all the nuance and drama that James Macpherson can muster.

Rebus has four cases on his plate - hunting down the sadistic 'Johnny Bible,' a copy-cat serial killer of the real killer dubbed 'Bible John', who raped and murdered women he met at the Barrowlands Dancehall in the 1960s, and who was never caught. Rebus is also under pressure from an internal inquiry led by a man he has accused of taking bribes from Glasgow's 'Mr Big'. Even worse, TV journalists are poking about into Rebus's past over an alleged miscarriage of justice.

With his personal life in a mess, Rebus travels the length and breadth of Scotland - Glasgow, Edinburgh, Aberdeen, Shetland and the North Sea - risking his own safety with an investigation into a suspicious death of an oil-rig worker and contacting the ruthless underworld career criminal Big Ger Cafferty, a vicious character Rebus has locked horns with several times in the past. With leads relating to the supply of drugs from mainland Scotland to the oil-rigs, and the accusation of police corruption in an old murder case which implicates Rebus and his former mentor Lawson Geddes, Black & Blue is complex, unsettling and very very good. Truly a contemporary crime classic.