The Whole Truth by David Baldacci 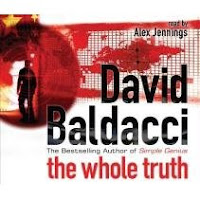 So near to the truth as to be not entirely comfortable listening, The Whole Truth is a tour de force from start to finish. With recent events in Georgia resonating in one's head, David Baldacci's prescience is stunning and commands attention right from the opening minute.

Baldacci makes James Bond seem like a fairy-tale character and his exploits public school romance for cosy fireside entertainment. The Whole Truth is the real thing - terrifying, brutal, relentless and all too believable. The protagonist, Shaw, is an agent who attempts to keep the world safe in the face of despots, malevolent capitalists and political psychopaths. His life is not his own and yet he yearns for well-earned retirement and the intimacy of marriage. But, once a spy always a spy.

Too complicated to summarise in a review, The Whole Truth is just great writing, skilfully abridged by Kati and Julian Nicholl, and brilliantly narrated by Alex Jennings.

This will not disappoint.