The Hundred-Year-Old Man by Jonas Jonasson

The description ‘picaresque’ (‘an episodic style of fiction dealing with the adventures of a rough and dishonest but appealing hero’ – Concise Oxford Dictionary) gives a fair idea of Jonas Jonasson’s celebrated first novel The Hundred-Year-Old Man Who Climbed Out of the Window and Disappeared, written in Swedish, which has gained well-deserved plaudits from all over the world in all the many languages in which it has appeared. 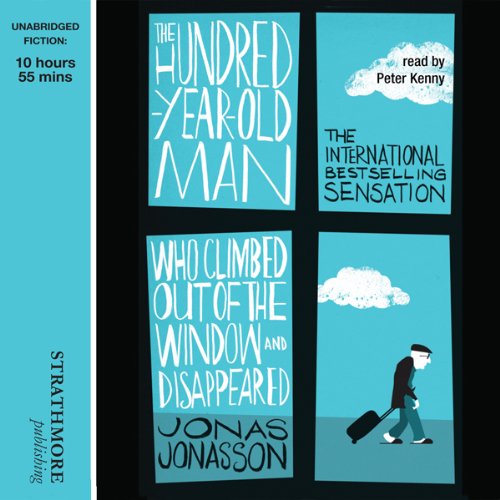 The novel opens on the birthday of the hundred-year-old Allan Karlsson, and, as he sits in his room in an old people’s home awaiting a party he doesn’t want, he decides to climb out of the window and disappear. He makes his dash for freedom in his slippers and, searching for more suitable alternatives, purloins a suitcase, which might very well contain a pair of more appropriate footwear. And so the adventure begins.

What follows, over almost eleven glorious hours, is an amazing tale involving the aforementioned suitcase, which just happens to be stuffed with cash, a series of dead bodies that end up all over the world, an elephant, gangsters and an increasingly exasperated Prosecutor and Chief Inspector of Police, who try to make sense of what exactly transpired, post defenestration.

Allan’s account is interspersed with his autobiographical reminiscences, which is a history book of twentieth-century politics that the old man apparently witnessed at first hand, the world leaders he had dealings with and the events he managed to take prominent if modest parts in, chronologically arranged and full of hilarious and ironic detail. These include the Spanish Civil War and Generalissimo Franco, the production of the atomic bomb at Los Alamos and Presidents Roosevelt and Truman, dealings with the wife of the anticommunist Kuomintang leader Chiang Kai-shek in China and Mao Tse-tung, the trouble with the Anglo-Iranian Oil Company and the intervention of Winston Churchill, Stalin’s drive to attain the atomic bomb, Kim Il Sung and the Korean War, President de Gaulle and France in ’68, and various episodes involving US Presidents Johnson, Nixon and Carter. Not forgetting his friendship with Albert Einstein’s guileless and guiltless half-brother Herbert.

Sharp and funny, Steven Crossley’s brilliant narration adds massively to one’s enjoyment of what is a sensationally splendid shaggy-dog story.

Priceless.
* * * * *
© copyright 2013 AudioBooksReview. All rights reserved.
Buy The Hundred-Year-Old Man Who Climbed Out of the Window and Disappeared