Toilers of the Sea by Victor Hugo

Apart from the plays of Ibsen and Chekov, which for some reason have always been part of the so-called canon of English literature, readers whose first language is English are not too keen on translations from other tongues. And this is rarely because we can easily read them in the original. Much Greek and Latin writing is unfamiliar to modern readers, let alone the Decameron or the Divine Comedy. Crime and Punishment, Dr Zhivago, Don Quixote and a few others (the Bible, for example) might be exceptions, but English versions of writers in other languages are, comparatively speaking, few and often centuries between. 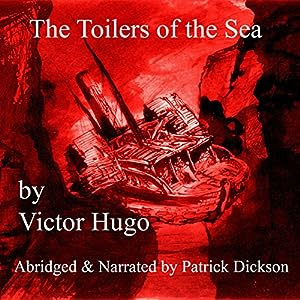 Victor Hugo’s novels and short stories are little known except in different media, such as the phenomenally successful ‘Les Mis’ or the stage, feature film and cartoon versions of The Hunchback of Notre Dame. So it is a treat to hear Hugo’s Toilers of the Sea, a tale that has been filmed many times but deserves to be read or listened to in this exceptional audiobook by Patrick Dickson.

Dickson has used the nineteenth-century translation by William Moy Thomas, which shows its age on the printed page but is cleverly brought up to date in Dickson’s abridgement. He has cut the digressions and kept the grist, telling this sad tale of greed, courage, longing and disappointment splendidly.

Set in the small French-speaking community of the Isle of Guernsey, the story concentrates on the shipping business in the years after the Napoleonic Wars. A sailor by the name of Gilliatt convinces himself that one of the village girls, Deruchette, the niece of Mess Lethierry, a local ship owner, is interested in him romantically. Gilliatt says nothing, but keeps his eye on the girl and woos her with his plaintive bagpipes. When Lethierry’s ship is wrecked on a reef, Deruchette unexpectedly promises to marry whoever can salvage the ship’s steam engine, a piece of state of the art technology signifying the encroaching industrial age. Gilliatt volunteers to undertake the Herculean task of salvage, and the tale describes in detail the trials and tribulations of the mission. He is driven by love, so overcomes all odds, including a famous encounter with a giant octopus, one of the most famous parts of the story:

‘Gilliatt recoiled; but he had scarcely power to move! He was, as it were, nailed to the place. With his left hand, which was disengaged, he seized his knife, which he still held between his teeth, and with that hand, holding the knife, he supported himself against the rocks, while he made a desperate effort to withdraw his arm. He succeeded only in disturbing his persecutor, which wound itself still tighter. It was supple as leather, strong as steel, cold as night.

A second form, sharp, elongated, and narrow, issued out of the crevice, like a tongue out of monstrous jaws. It seemed to lick his naked body. Then suddenly stretching out, it became longer and thinner, as it crept over his skin, and wound itself round him. At the same time a terrible sense of pain, comparable to nothing he had ever known, compelled all his muscles to contract. He felt upon his skin a number of flat rounded points. It seemed as if innumerable suckers had fastened to his flesh and were about to drink his blood.’

An absorbing tale, full of atmosphere and suspense, beautifully read, with a great range of characters and voices, this would make a long car journey for a family audience enjoyable and rewarding.


The sound effects (seagulls) are effective and the music (accordion, bagpipes and cello) is excellent, but by the end of the story you feel they might, perhaps, have been used slightly less often.

Buy Toilers of the Sea