The Cuckoo’s Calling by Robert Galbraith 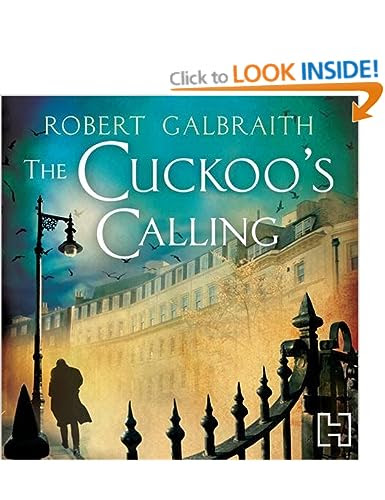 With hindsight, of course, it is possible to find the hallmarks of author J. K. Rowling in the pages of Robert Galbraith’s The Cuckoo’s Calling – the complicated and burdensome details, the extraordinary names, the dysfunctional families and their relationships, the intentional and unintentional satire – but many first readers (including, it is said, commissioning editors sifting unsolicited manuscripts to publish) failed to make those links.

Rowling apparently let it slip a long time ago that she wanted to write in the police procedural genre – and has in fact completed a second title in the Cormoran Strike (our detective hero of The Cuckoo’s Calling) canon. And The Cuckoo’s Calling is a very good yarn indeed, with much to recommend itself as an audiobook, brilliantly read by Robert Glenister.

Strike is an unlikely hero: the one-legged former soldier, son of a stereotypical rock legend, beating off debtors and death threats from previous cases and, as the novel opens, living through the collapse of his relationship with a society beauty.

What cannot be denied is the sheer story-telling skills that the Harry Potter author refined through the many volumes of that particular tale. The opening to the novel is excellent, and should film especially well. A wealthy and stunningly photogenic ‘supermodel’ falls to her death from the balcony of a disgustingly extravagant house in central London, and foul play is ruled out by the (naturally) incompetent or easily persuaded Metropolitan police. The girl’s adopted brother, John Bristow, chooses the very much down on his luck and down at heels private investigator Cormoran Strike (known to him through the detective’s friendship as a boy with Bristow’s brother Charlie, who died while at school in a tragic accident) to see if the apparent suicide really was suicide or something more sinister. The cast of fashionable young and not so young ‘celebrities’ is tongue in cheek bravura.

The prose is good:

‘The story forced news of politics, wars and disasters aside, and every version of it sparkled with pictures of the dead woman’s flawless face, her lithe and sculpted body. Within hours, the few known facts had spread like a virus to millions: the public row with the famous boyfriend, the journey home alone, the overheard screaming and the final, fatal fall …

But then, to an almost audible groan of disappointment, the witness was proven to have lied, and she retreated into rehab […] So it was suicide after all, and after a moment’s stunned hiatus the story gained a weak second wind. They wrote that she was unbalanced, unstable, unsuited to the superstardom her wildness and her beauty had snared; that she had moved among an immoral moneyed class that had corrupted her; that the decadence of her new life had unhinged an already fragile personality. She became a morality tale stiff with Schadenfreude, and so many columnists made allusion to Icarus that Private Eye ran a special column.’

What is intriguing in The Cuckoo’s Calling is that the writing at times reads as if it is coming from the pen of a man and then in the next chapter from the pen of a woman: Rowling has that fairly uncommon skill of identification with either gender. The dynamics of Strike’s relationship with his temporary secretary/office manager Robin Ellacott are particularly good: her initiative and tact cleverly defined. The beginning of a beautiful friendship.

Rowling’s books get more and more interesting, and perhaps her final legacy will be in the works as yet unwritten (or unpublished). And we can exclusively reveal that the crime novel is not the only genre Rowling is investigating. Our spies can say no more at present, so to speak.

The quotations that litter the chapter openings (and the sometimes tortuous intricacies of characters and relationships) apart, The Cuckoo’s Calling is a fine novel and worthy of any listener’s time and attention.