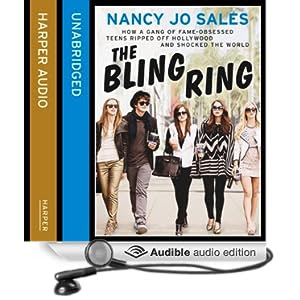 Nancy Jo Sales’s The Bling Ring is an account of the background to a series of court cases involving a group of seven school-age friends who stole shoes, clothes, jewellery and more personal possessions said to be worth millions of dollars from the houses of Hollywood actors and celebrities including Megan Fox, Lindsay Lohan, Paris Hilton and Orlando Bloom. They used social networking and showbiz and other websites, such as Google Earth, Twitter and TMZ.com to help locate their targets and to compile a shopping list of what items to take. Sofia Coppola’s film of the same name premiered in Cannes at this year’s film festival.

Sales’s The Bling Ring is rather an oddity in that it is not exactly a book of the film, more a journalistic or sociological tie-in. And fascinating and important though it undoubtedly is, one wonders exactly who is the intended audience. I can’t see the teen movie-goers, keen perhaps to see Emma Watson of Harry Potter fame in more mainstream fare, reaching for this from the bookshelves or on their e-readers. At the same time, I doubt that their parents will want to know so much more about this curious slice of history than can already have been gleaned from the avalanche of magazine and newspaper articles that appeared at the time of the trials and following the release of Sofia Coppola’s movie.

Coppola’s film follows very closely the details reported in Nancy Jo Sales’s original Vanity Fair feature ‘The Suspects Wore Louboutins’, and visually reflects that article’s photograph of Alexis Neiers, one of the members of the so-called ‘Bling Ring’, nonchalantly sipping a Frappuccino. But the book and audiobook are more than extended reworkings of that original piece in Vanity Fair. There is more space for details of the thefts from the celebrities’ homes and there is more time for reflection on the longer-term psychological costs of the thefts for both stars and perps. The teenagers supposedly let themselves in to the homes of the stars on numerous occasions (keys apparently left under mats, doors left unlocked), often carting off suitcases stuffed with shoes, clothes and mementos. The sense of invasion felt by owners or tenants is palpably painful.

Perhaps the most interesting part of the whole saga is the mindless decadence of these modern-days Gatbys, with their exclusive fashion-label lives and the industry that promotes and feeds off ostentation, greed and envy. The Bling Ring members were not unmoneyed; this was not theft for financial gain so much as theft to become for a brief instant a player in the game of wish fulfilment. And Sofia Coppola herself seems not to have recognised and understood the solipsism of her undertaking, coming as she does from that rarefied world of the true Hollywood elite, the moguls and filmmakers, whose dynasties remain fast as the young stars they exploit appear for an instant and then are gone once more, while others queue in the wings for their five minutes of fame. It is here that the true value of this book lies. It provides a profound and sobering snapshot of an ugly world dressed up to the nines.

Fifty years ago, another group of teenagers let themselves in and ‘creepy crawled’ in the homes of celebrities in the Hollywood hills. Their trips had more tragic consequences. Perhaps Charles Manson is cursing and saying to himself right now, ‘If only we had stolen their cars and their beads and kaftans and let them be!’
* * * *
© copyright 2013 AudioBooksReview. All rights reserved.
Buy The Bling Ring