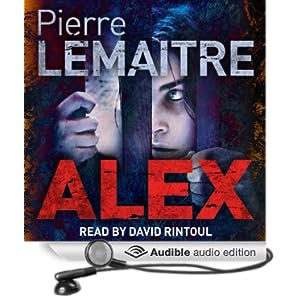 A truly terrifying roller-coaster of a novel, Pierre Lemaitre’s Alex has justly been praised by critics and readers on both sides of La Manche. Inviting comparisons with the books by Larsson and other twenty-first-century European crime writers, this is as far from Simenon as one could imagine. Stark, cold, cruel, brutal, intense, raw, extreme, violent: such adjectives simply do not do justice to the sadism and desolation of this book, brought vividly and unforgettably to life by both the translation by Frank Wynne and the narration of David Rintoul.

At first, one’s curiosity focuses on Alex and the details of her daily routine – what she wears, her interest in wigs, where she eats. She is an innocent victim, and her brutal abduction and imprisonment make difficult listening. She is placed naked in the notorious fillette – a suspended cage in which the prisoner cannot sit, stand or lie down – cold and starved save for dog food, that we soon find out is intended to attract rats that will wait for her to become unconscious before they start to feed on her.

Meanwhile, the French police have very little to go on. They are led by Commandant Camille Verhoeven, whose personal history of having had his own wife abducted and murdered adds poignancy to the drama. All they know is that a girl was snatched off the streets of Paris and forced into the back of a white van. They can do little but speculate and curse. Alex finally identifies her torturer as the father of a former boyfriend, but when he throws himself to his death following a police car chase, we think that her fate is sealed and that no one will be able to find her in the abandoned building on the outskirts of Paris. All our sympathies are with her. But why was she singled out for this bizarre cruelty? Is Alex all she at first seems?

One does not see the twists in this drama coming, and it would be wrong to give too much away. This is a book that must be listened to in suspenseful anticipation so that the shocks make as much impact as they can. And there are plenty of shocks.

This outstanding novel’s ambiguous denouement leaves us long pondering the meaning of evil, ending as it does with the cynical assertion that in this morally bankrupt world ‘what is important is not truth but justice’. You will need a strong stomach, but Alex is a masterpiece of the new gothic that shouldn’t be missed.