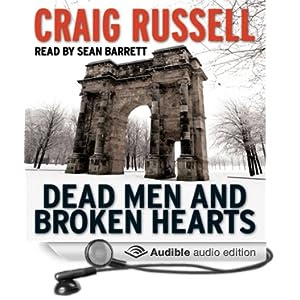 Lennox, Craig Russell’s Canadian-Scottish private investigator, clearly owes a great deal to Raymond Chandler’s Philip Marlowe. The title of the third Lennox novel, The Deep Dark Sleep would certainly seem to confirm the Chandleresque homage. Marlowe and Lennox share a dry, witty reflectiveness on their respective stomping grounds (Glasgow and Los Angeles). Both detectives have an uneasy relationship with their respective police forces and tangle with the gangsters of their particular era and locale. Both appear to maintain a code of honour quite unexpected amongst the hard-bitten, cynical characters who populate their driven, thoughtful crime novels.

In Dead Men and BrokenHearts Lennox has been hired to work on two new cases: one by a woman who thinks her husband is being unfaithful, the other investigating the disappearance of a union official and a large amount of cash. Against the political backdrop of Suez and the Hungarian uprising, there is an abundance of period detail that makes the whole thing brim with verisimilitude. Everything seems to revolve around ‘Tanglewood’ – the name overheard by the suspicious wife who sets Lennox off on his goose chase at the opening of the book. But is it a surname, a business, a town? Before the dramatic and enthralling climax, Lennox is forced to go on the run, fugitive from the Glasgow Constabulary, aided and protected by Twinkletoes, the heavy from the very first Lennox novel and whose speciality is extracting information from unfortunates by clipping off their toes with a bolt cutter.  The ubiquitous smog, mystifying mistaken identities, elusive Secret Service personnel, shadowy and sadistic European politics and morally redundant post-war malaise all inhabit this entertaining and intriguing narrative, superbly brought to life by the incomparable Sean Barrett.

In this, the fourth in the Lennox series of novels, the investigator seriously plans a new life back in his native Canada where he can put everything behind him – removing himself from the ‘dead men and broken hearts’ that is said in the book to sum up Lennox’s life past and present. I, for one, hope he changes his mind.

This series is a great find. Spread the word: you will definitely fall under the Lennox spell.