Memoirs of a Fox-hunting Man by Siegfried Sassoon 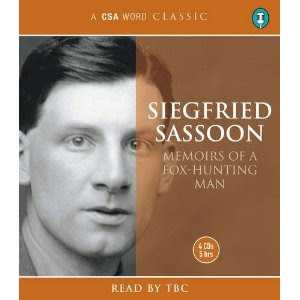 Poet Siegfried Sassoon enjoyed a remarkable success when Memoirs of a Fox-hunting Man was first published (anonymously) in 1928, and it has remained in print ever since. Don't be put off by the title: Memoirs is about a fox-hunting man and his country pursuits, including point-to-point races as well as a bit of the chase: fox-hunting is just a small part of the whole. Non-hunting readers will find much in which to delight as they relish the sheer power of the prose.

The barely concealed autobiography brims full with comic characters and the awkward humour of growing up, especially for a relative outsider making his way through layers of class and the status quo in the English home counties before the First World War. The protagonist George Sherston's first riding lesson and the incomparable flower-show cricket match typify this bucolic paean celebrating the author's idyllic Edwardian childhood in the English countryside of a bygone era. The cricket match, played on the village green in Siegfried Sassoon's native village of Matfield, is still an annual fixture between George Sherston's XI and Matfield Cricket Club.

James Wilby adopts just the right voice and accent, and is absolutely splendid. Let's hope CSA Word persuade him to record the sequels to Memoirs of a Fox-hunting Man: Memoirs of an Infantry Officer and Sherston's Progress.