The Day of the Triffids by John Wyndham 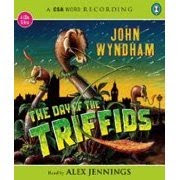 John Wyndham's skills and achievements seem to have been only grudgingly acknowledged by writers of science fiction following in his groundbreaking footsteps. Brian Aldiss, for example, described a genre of science fiction in which society is destroyed save for small groups of survivors who go on to eke out a changed, but fairly comfortable, existence. He called the genre ‘the cosy catastrophe’ and earmarked The Day of the Triffids as one such example.

But Triffids is certainly not ‘cosy’. It is a deadly serious warning, chillingly credible and, as ever with Wyndham, startlingly prescient.

Published in 1951, the genetic engineering of plant species and weapons-bearing satellites were far in the future: the role of DNA in heredity was confirmed only in 1952 and the first artificial satellite, Sputnik 1, was launched from the Soviet Union in 1957. Moreover, at the beginning of the 1950s, oil for petroleum and diesel was deemed plentiful. Only in 1956 did Shell geologist Marion King Hubbert predict that US domestic oil production would peak in 1970. Hubbert was derided and vilified, and his warnings were dismissed by politicians and by the oil industry. Only now are botanists and biologists desperately seeking out and testing all manner of plants that might be harvested for ‘bio-fuel’, just as triffid oil is plundered in Wyndham’s book.

There has been so much technological change since Wyndham was writing that we may find the occasional anachronisms in this story, set in, for us, the not so distant past, mildly amusing (the stocks of coal at railway stations or the continuing existence of the Soviet Union), but his predictions are poignant and uncanny. And, after all, human nature has not changed, although social values have. Bill Masen, the narrator, is a 50s hero through and through, and Josella Playton’s racy early years make her of a different mettle from her post-Second World War sisters, but she settles down to domestic type perhaps just a little too easily for a modern readership. Beadley, Coker and Torrence make entertaining and recognizable characters, with their nefarious schemes, methods and practices. Miss Durrant is someone who is still heard on radio phone-ins and found corresponding with newspaper editors today, proselytizing her particular radical form of Christianity.

If you have never read The Day of the Triffids, or know it only through film or television adaptations, do not hesitate to buy this excellent CSA Word recording, brilliantly narrated by Alex Jennings. Jennings carries all the characters with consummate skill. The incidental music also is especially well chosen.

A triumph: thought-provoking audio entertainment at its best.

© 2010 AudioBooksReview
Buy The Day of the Triffids