The Black Book by Ian Rankin 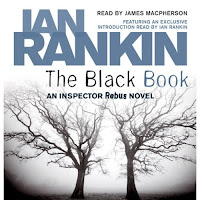 A classic Inspector Rebus story with a rare introduction by the author telling of his inspiration in the form of a trip across the United States after he won the prestigious Chandler-Fulbright award. A diner the family visited on the trip was the source of the Elvis Presley restaurant featured in The Black Book. But the rest of the book is totally Rankin - pure malt scots.

Rebus is in a dark mood here. Thrown out by his girlfriend, reluctantly forced to share his flat with his convicted drug-felon brother and the students he is supposed to be renting to, a police colleague is mugged and Rebus starts to decipher the coded entries in the man's little black book. Rebus uncovers the brutal string of consequences that had lead, in a long-forgotten case, to a hotel fire and the discovery of the charred remains of a man who had been dead before the fire started. Rebus's brother ends up hanging for his life from a bridge, and terror stalks the darkest streets off the Royal Mile. The Inspector even buys himself a firearm for his own protection.

Read by a master of the art, James Macpherson.

Noir at its finest